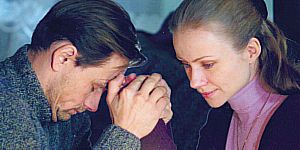 …He is a cameraman who provides “hot spot” footage always in time. But suddenly he falls in love – shortly before his routine trip to a military conflict area.

She was not like other women. She knows well and forgives him that he had to take this trip and give no promises…

feature about the power of love.

It’s a powerful dramatic story about secret military operations in Tadjikistan in early 1990-s waged for 6 years with Russian special troops involved. Not very many military historians were informed about it.

The film was shot in Moscow, in the Crimea and in Tadjikistan.