Three Russian films will be screened at the Venice Film Festival: a psychological drama The Betrayal  by Kirill Serebrennikov (the Main Competition program),  I Also Want It by Alexei Balabanov (the Horizons program) and Anton’s Right Here by Lyubov Arkus (side-bar program).

The 69th edition of Venice International Film Festival held in August 29 – September 8, 2012  presents 60 films from 41 countries, including 18 titles in competition. They were selected by a new Festival’s Artistic Director Alberto Barbera, who claims he was focusing on “quality not quantity”.

The following films will compete in the Main Program for the festival’s principal award, the Golden Lion:

The Betrayal by Kirill Serebrennikov

This psychological drama / thriller is a strong love-and-hate, passion-and-sin cocktail. A man meets a woman. Soon they find out that their spouses are lovers. They start a passionate tit-for-tat love-affair, the adultery mainly occurs at the hotel.

Producer Sabina Yeremeyeva: “Our film is about the most destructive power of passion, about our hidden emotions, our secret world, which we want and hate, …which eventually results into a loneliness.”

I Also Want It  by Alexei Balabanov 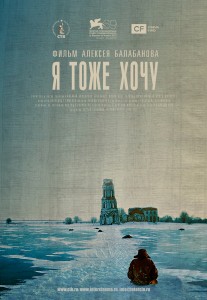 Russian mystic drama I Also Want It by Aleksei Balabanov is screened in the Horizons festival program. The film resembles Andrey Tarkovsky’s Stalker. The four main characters are searching for an old desolate church, a miraculous temple in the distant territory close to a nuclear power plant. Some seldom visitors, the chosen-ones, enter the church and find eternal happiness there.

Plot: Anton Kharitonov is a sick autistic teenager, who lives in a shabby apartment in the outskirts of St.Petersburg and has to attend the asylum for examination now and then.

Two Russian directors have won Golden Lions in the past. Andrei Zvyagintsev won two Golden Lions in 2004 for his film debut, The Return. 7 seven years later in 2011 a Golden Lion was granted to Alexander Sokurov for Faust.

Posted in Festivals & Markets, Films in the Western Festivals/Screenings | 1 Comment

One Response to Russian Films At The 69th Venice Film Festival